The $ES_f couldn't make it three in a row

The E-mini S&P traded lower two days in a row for the first time since late September.

Although losses were minimal, the ES managed to settle in the red on two consecutive trading sessions to close out last week. In a normal market this wouldn't be worth a mention, but in this market, it is a rare occurrence. The last consecutive negative closes took place on September 25th and 26th. Before that, you have to scroll the chart back to early August!

I doubt the _bulls_ are concerned in light of the fact that the ES is within 15 points of its all-time-highs. On the flip side, the _bears_ must be growing concerned over the fact that the seasonal tendencies from Thanksgiving through the end of the year generally call for higher stock prices.

That said E-mini S&P futures traders are holding one of the longest positions we've seen this year. Thus, one has to wonder if the bulls will soon run out of capital. After all, most of the bears have already been squeezed out of positions. This is true even in the stock market, the percentage of outstanding short positions on individual equity products is near record lows. 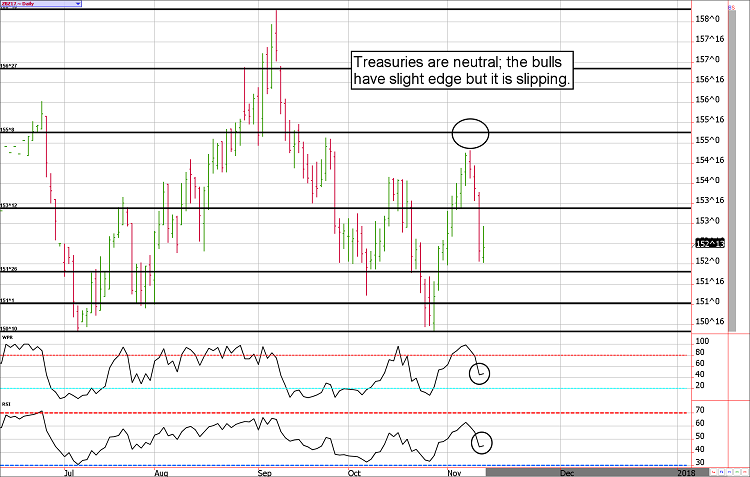 Tax reform probably won't live up to the hype and seasonals are a "buy" for Treasuries.

As a short-term Treasury bull, we were disappointed by the sluggish trade that closed out last week. However, we also know that Friday's in Treasuries are often counter-trend and aren't necessarily telling as to what the future might bring. Monday's stability suggests the bulls still hold a slight edge.

Further, our friends at MRCI have pointed out a seasonal trade in the December 30-year bond that suggests buying on, or near, November 13th and holding through the 26th has produced profits in 12 of the last 15 years.

We are holding a neutral-to-bullish position in the 10-year note in anticipation of the seasonal boost (notes should follow bonds higher if it happens), but will be looking for a place to lock in profits in the coming week or two (assuming things go as planned). 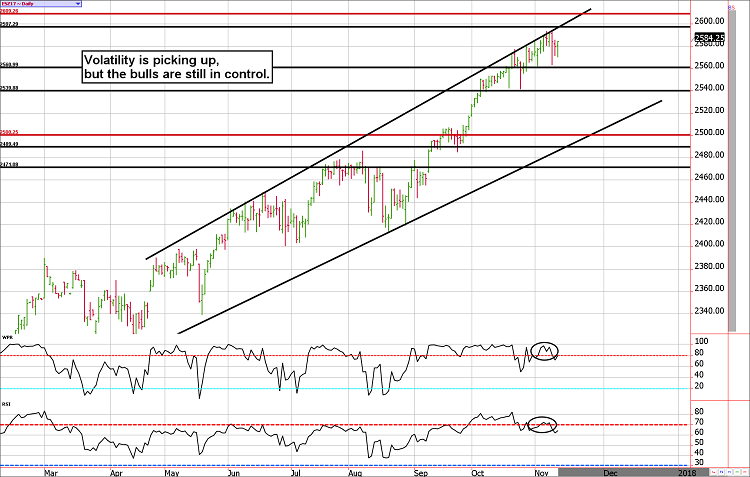 According to seasonal tendencies, the closer we get to the holiday season the more bullish the stock market tends to get. Maybe it is Christmas spirit, but we think it has more to do with low volume short squeezing than anything. That said, this year might be interesting; most of the shorts are already squeezed out...is their anyone else left to squeeze? On the other hand, there doesn't seem to be any shortage of retail investors putting money to work in stocks. Perhaps, these are the same investors who were scrambling to cash out of the equity market in early 2009. We will soon find out.

MRCI suggests a seasonal "buy" signal occurs from November 19th through December 6th. This trade has worked 100% of the time over the last 15 years.

The ES has surpassed our expectations, but that doesn't change the big picture. It is a better "sell" than it is a "buy" from these levels.

October 4 - Adjust the bearish ES trade by buying back the December 2500 put and then selling the January 2500 put. This adds about 20 points to the profit potential and offers a better risk buffer on the upside.

October 20 - Buy back the January ES 2500 put to lock in a gain and the sell a March ES 2500 put for a 20 point credit to create a better risk buffer for our short ES position.

October 24 - Buy back January 125 ZN call to lock in a gain. Then sell the March 125 call to bring in additional premium to cushion the downside risk to our long ZN position.

November 10 - Take a quick profit on the Feb live cattle call option. Most were profitable by about 60 to 65 ticks before transactions costs per lot ($240/$260).