2405 is holding, the e-mini S&P futures could be getting toppy

Solid payroll data, the "safe" choice in France...yet the ES can't break above 2405

We've been eying the 2405 area in the June e-mini S&P for several weeks. Last night, the futures touched 2403.75 which was enough to complete the technical pattern. It is possible that we've seen the highs in the ES for now. In a post-payroll, earnings season, and French election world, it truly feels like all of the good news is out. Of course, we've also noted the next area of resistance near 2420, which is still a possibility but our guess is the market will find some sort of high between the noted levels.

Unlike last week, this week comes with very little data risk but of course, there will always be political risk (at least for the foreseeable future). We are looking at the current setups in both stocks and bonds and see the potential for reversals sooner rather than later. 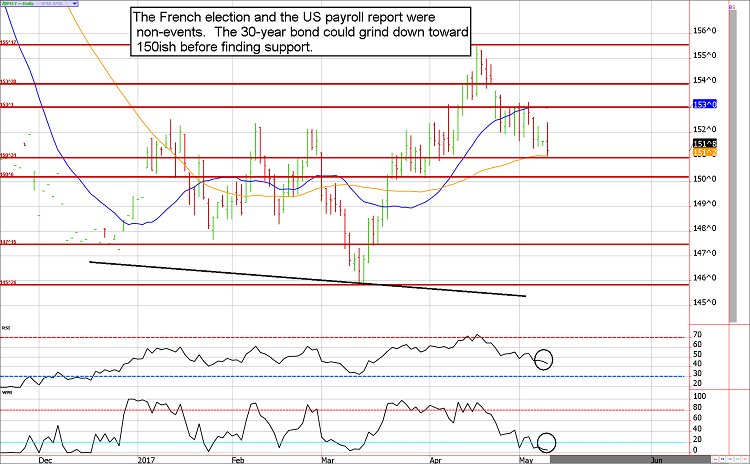 Treasuries have slowly made their way lower but could be running into support in the coming sessions.

Another strong payroll report and the expected outcome in France seemed to put a cap on Treasuries but we have a feeling the selling will have run its course within the next point or two in the ZB (30-year bond). Not only is the market not overbought anymore but there are some indications of it becoming oversold.

We've also noticed that large speculators (according to the COT Report by the CFTC) have not only unwound their massively bearish positions but have started to go long the 10-year note. At this point, their bullish position is modest but the fact that the "smart money" is nibbling on the long side of the Treasury market could mean the downside is limited. Further, if the S&P is as toppy as it feels it is reasonable to argue that the risk in bonds and notes is to the upside rather than the downside.

**Bond Futures Market Consensus:** We are relatively neutral but will likely be turning bullish from moderately lower prices. 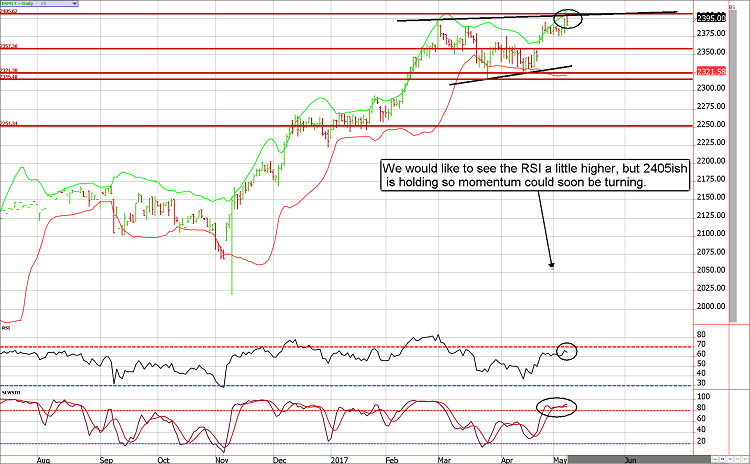 The risk in equity indices is to the downside, it would be difficult for the June ES futures contract to travel beyond 2420ish.

It was interesting to watch the business news channels this afternoon. Bond bulls and stock market bears were few and far between. While the pundits might be right in the long-run there is a lot working against those calls in the short-run. We just can't ignore swift technical resistance in the S&P in combination with historically low volatility. These two factors rarely end well for the aggressive or complacent stock market bulls.

If you made some money on the way up, be sure to lock it in or at least protect profits. Things could start to get rocky for the rally.

The equity market could be getting toppy, we see resistance near 2405 and again at 2420ish. The ES should struggle to rise above this range.

April 21 - Go long July wheat futures in a small way (minis or full-sized depending on account size) near $4.19.

April 27 - Buy back June hog 66 put to lock in about $250 per contract before transaction costs.

May 3 - Roll June live cattle 123 calls into double the quantity of August 129/112 strangles for close to even money. This spreads risk to both side of the market and slows things down.

May 4 - Exit ZN trade completely before the jobs report. Profit could be anywhere from $400 to $500 per contract depending on fills before transaction costs.