Is a high consumer confidence reading pointing toward a stock market top?

Consumer Confidence at 125...are you kidding me?

The Conference Board's Consumer Confidence index for the month of March was reported on Tuesday to be 125.6! If I recall, this index bottomed out near 20 as the stock market was making what we now know as a generational low in 2009. I started to type that the March reading was the highest I've ever seen, before noticing that it printed a 128.6 at the end of 2000. In all fairness, I was a clueless college student in 2000 so even if it happened, I probably didn't actually see it.

The premise behind this index is that consumers are feeling emboldened by a positive view of business, labor market conditions, and the overall economy. On a side note, the survey responsible for this index was taken before the failure of the health care reform bill. Nevertheless, it is clear that consumers are feeling good and as a result, they are putting money to work in the stock market.

If you look at a long-term chart of the Consumer Confidence index, it almost identically coincides with the direction of the stock market. With this in mind, there could be some red flags waving. In the past, we've seen major tops and bottoms in the stock market at times in which the Consumer Confidence index is at extreme highs and lows, respectively. Particularly readings in excess of 100.

*It is only fair to note that the Consumer Confidence hovered above 100 in the mid-2000s for quite some time before the stock market rolled over and during that time stocks rallied nicely (until they didn't). 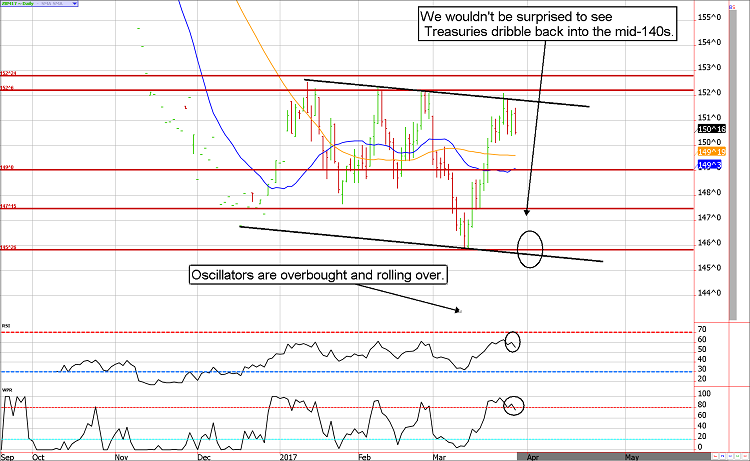 With resistance holding, we don't see any reason to be bullish bonds in the short-run

We'll keep it short. Despite what seems to be an overcrowded short trade in the Treasury market, it seems as though the masses will get their way for the time being. Seasonals are bullish in equities, which should lead stocks higher and bonds lower in the coming week or so. In fact, if the ES tests the 2405 area as expected, we could see the 30-year bond decline into the 145/146 area.

**Bond Futures Market Consensus:** It feels like the rally as rolled over. We could see another trip back to the mid-140s in Treasuries. 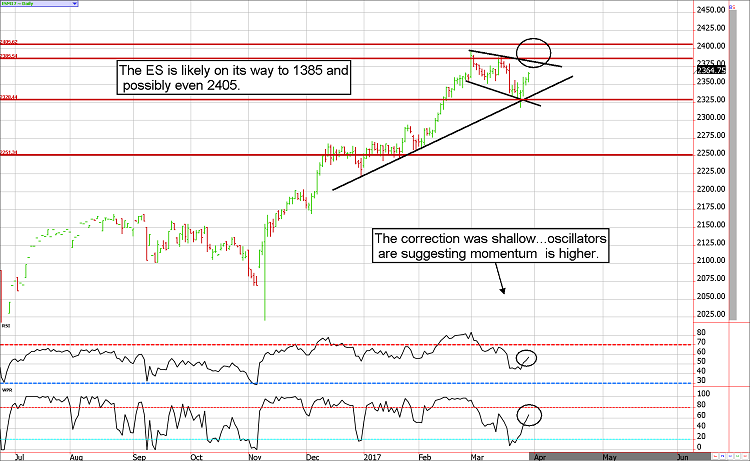 Late March is usually rough for stocks, but not this time.

The last few days of March have been known for sharp stock declines as funds square positions going into the end of the quarter. However, we are getting the opposite scenario. Funds NEED to be long stocks, so we are seeing some window dressing. Those looking for the market to collapse once the quarter ends will probably be disappointed.

April has historically been good for stocks. In fact, April is the best month for the Dow with an average gain of 1.9%. Also, the month of April has been up for stocks ten years in a row and has delivered solid performances in postpresidential election years since 1950 (according to the Stock Trader's Almanac).

Supportive seasonals and technical momentum should lead the ES to 2405.

March 29 - Exit June hog covered put trade to lock in $750 to $800 before transaction costs per contract.