Dip buyers come to the rescue in the ES futures

Off the cuff comments made by the President-elect yesterday regarding US drug companies and a realization that higher trending interest rates (despite the recent recovery) is hurting the housing market, soured the equity market rally. As is usually the case, the market wasn't reacting to changes in fundamentals but rather expectations of changes in fundamentals. Accordingly, as we go on traders will either retract their initial reactions to these events or add to them. At the moment we are merely seeing back and fill trade as expectations are tempered. Today's trade wasn't a victory for the bears or a defeat of the bulls, it was simple consolidation.

The economic docket for tomorrow is busy, but we doubt the market will be paying attention to the second-tier reports (PPI, Retail Sales, and Michigan Sentiment). The fireworks will likely be next week with the Presidential inauguration (who knows what types of market-moving comments could be made on both sides of the isle). 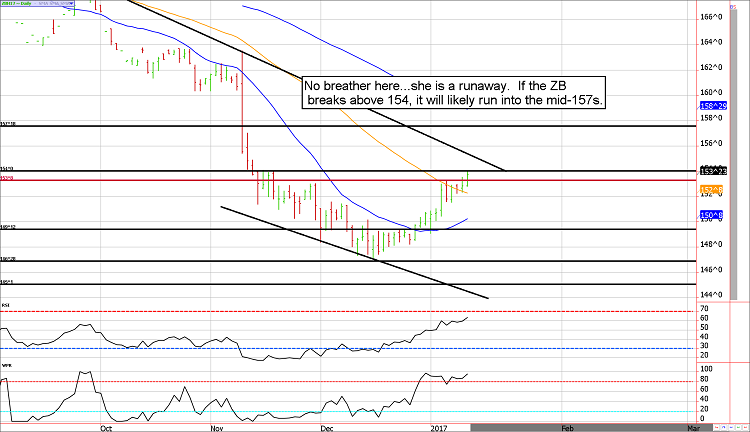 The ZB rally isn't stopping to take a breath

Although this week's economic news doesn't hold any game-changing information, there has been plenty of "Fed-speak" to keep things interesting.

St. Louis Fed President Bullard, who is a member but not a voter, stated he believed the Fed could be patient on inflation. He doesn't believe fiscal changes will have much of an impact until 2018. He also noted the interest rate markets could be getting ahead of themselves. He is predicting a single rate hike in 2017. This differs from the committee's expectations for three. In fact, both Philadelphia and Chicago Fed Presidents came out today in favor of three 2017 hikes (both are voting members). The reality is probably somewhere in the middle (two).

According to current pricing in the Fed Funds futures, the market is attaching a 50% chance of a Fed quarter-point rate hike by the June meeting. We think the market is over-pricing the odds of such a hike occurring in that time frame. If we are correct, the path of least resistance in interest rate products should remain higher for now (yields lower).

**Bond Futures Market Consensus:** The path of least resistance is higher, but indicators are slowly moving into overbought territory. 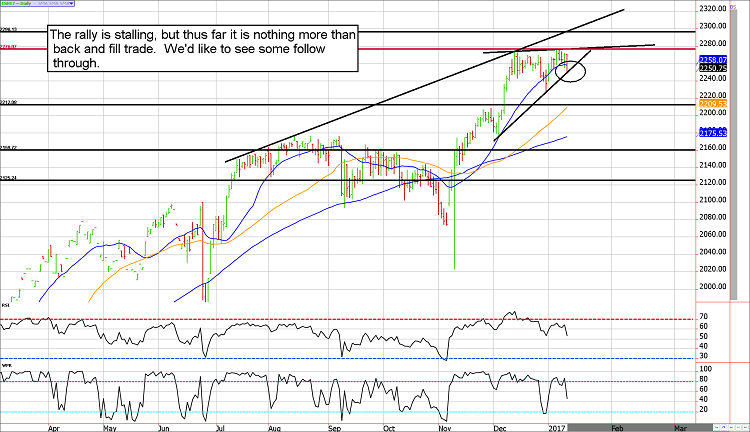 Dip buyers come to the rescue in mid-day trade

It is clear that the massive piles of cash that have been sitting on the sidelines are finally being put to work on even the smallest dips in the S&P 500. However, with so many people desperate to get long the market near all-time highs, we can't help but be cautious. For instance, we've read numerous articles in which equity managers are suggesting investors that haven't touched the stock market since 2009 are finally starting to dip their toes into the water.

We aren't saying 2016 will be remembered as the top of the market in the same way 2009 is remembered as the bottom, but being bullish stocks at the same time as a group of investors that cashed out their portfolios on the 2009 lows doesn't feel right.

**From the last newsletter but still in play:**

The Presidential inauguration is scheduled for late next week and earnings season begins the week after, yet this week poses little event risk. Accordingly, investors are comfortable in their positions and volatility and volume are at depressed levels. In the meantime, it might be difficult for prices to make much headway in either direction.

We haven't changed our stance. We think a near-term high is looming, but we can't rule out a quick probe to 2295. Thus, we are holding long ES puts and will be willing to sell calls on a spike higher.

We are short-term bearish, but chasing prices lower doesn't work. Look to buy puts or sell calls on large upswings.

***We are now charting the March contract!**

October 27 - Liquidate half of the corn position, which was added near $3.33 to lock in a profit of about 20 cents.

January 3 - Buy back January S&P 2290 calls to lock in a profit of about $300 per lot before transaction costs.