No surprises from the Fed, maybe seasonal tendencies will take over financial futures

Going into today's FOMC meeting conclusion, the Fed Funds futures markets were assigning a 15% probability of a rate hike. As it turns out, the majority of traders were correct in assuming the Fed would bypass the September meeting. In our view, we probably won't see any action until December but of course, the November meeting is still up in the air.

We recently took part in a survey conducted by FXStreet.com in which we found the results to be rather interesting. According to the survey, expectations of the rate hike campaign are rather meager. The consensus average of those polled is calling for the rate hike cycle to stop at about 1.5%. Some were even predicting the Fed would stop at .75% (only one more rate hike from the current level). Also interesting, almost 60% of those polled believe quantitative easing is a tool the Fed will continue to use in the mid-to-long term. 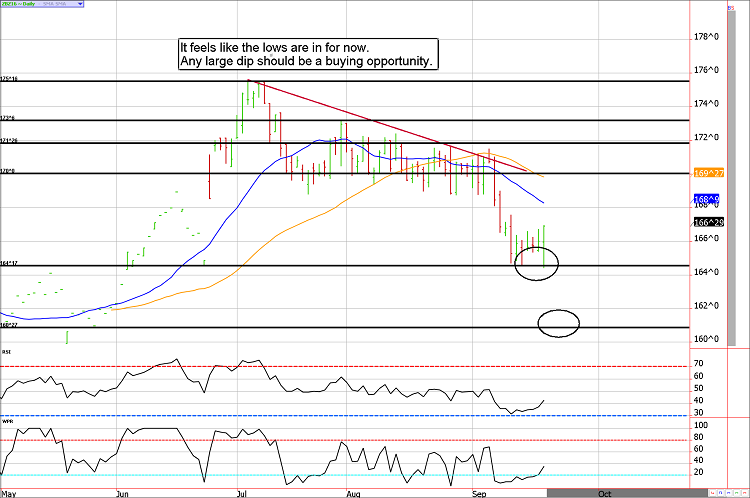 The Treasury market is confused, and so are we

Both the 10-year note and the 30-year bond continue to hold support, leaving the technical landscape in the Treasury market positive. Additionally, the seasonal tendency for bonds and notes is to grind higher overall into the latter part of the year. Accordingly, we caution against getting overly bearish.

On the other hand, each rally has been met with selling and option expiration is right around the corner (Friday). It is relatively common for markets to make a move in the direction of the trend to put pressure on option traders (for instance, those short puts which has been a popular trade). Also, the overnight reaction to the BOJ was nearly erased by the time the US day session rolled around; traders might want to explore those lower levels again.

In a nutshell, signals are mixed at best. Yet, today's post-Fed trade suggests market momentum could be turning from neutral to bullish. We have to lean higher from here...big dips will likely be buying opportunities.

**Bond Futures Market Consensus:** We favor the upside on big dips, but those dips can be significant...be careful. 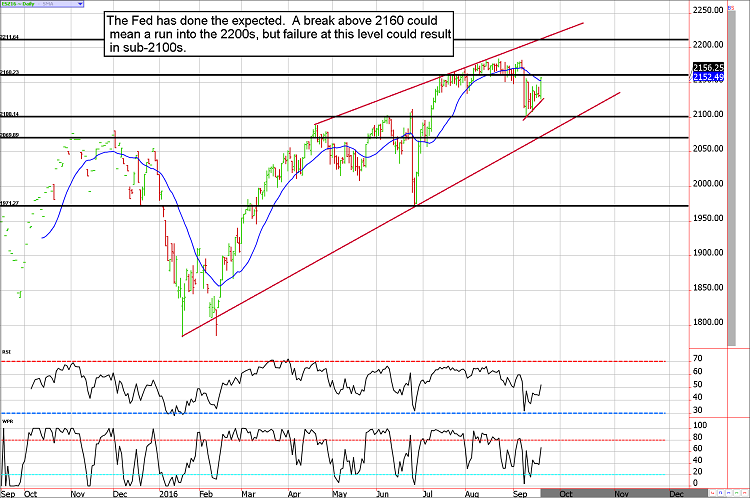 The ES refuses to stay down

Despite rocky seasonals in August and September, as well as what has historically been a rough week for stocks following the September triple witch, the bull marches on. As much as I love seeing the market move higher regardless of the news or peripheral headwinds(because of the impact on my IRA), something doesn't feel right.

Healthy markets correct, and this market just can't seem to dip more than a few percentage points. That doesn't mean we can't rally from here, but it does mean the bulls will eventually pay the price for the "easy money" they've been enjoying.

**e-mini S&P Futures Market Consensus:**
Our best idea would be to get temporarily bullish with swing trades should the ES fall into the 2070 area, or bearish if the market sees 2215ish.

These are based on the December contract!