This is what professionals call a WTH market (the "H" stands for heck).

Markets undergoing vast changes in their technical outlook on a minute to minute basis are best described as WTH markets.  I have no doubt that investors who have been trained, and thus far rewarded, to "buy the dip" were putting money to work early this morning as the S&P 500 screamed higher, but I also have no doubt they are now remorseful buyers.

The market looked equally as horrible on the close as it looked fantastic on the open. In such markets, typical market analysis techniques simply don't work and traders attempting to chase prices back and forth will wish they had never heard of momentum indicators.

In the past, WTH markets have been followed by big moves so traders should approach the S&P with more caution than usual. 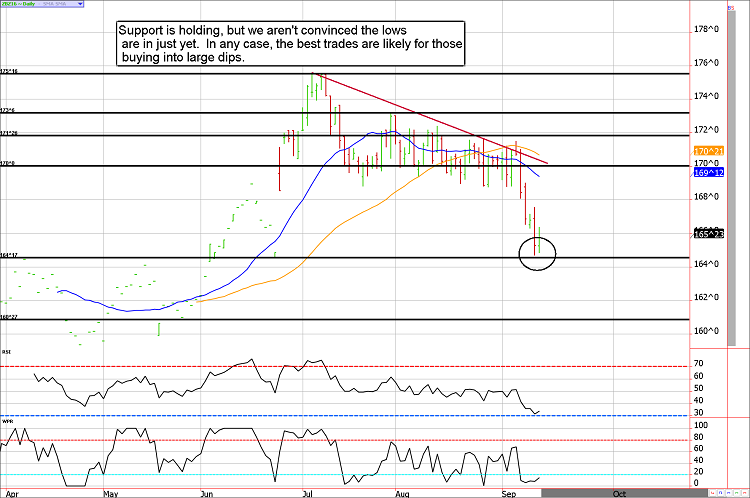 Bonds and notes will eventually be a better buy than they are a sell but we aren't convinced the lows are in yet.

The 30-year bond and the 10-year note have bounced from oversold levels but today's upswing didn't feel like a trend change. Instead, it felt like a tepid retracement before a bigger move lower. Of course, there is plenty of event risk interfering with chart analysis (such as next week's Federal Reserve meeting), but we wouldn't be too eager to get bullish from these levels despite support in the 30-year bond holding.

We see the possibility of the 30-year Treasury futures contract printing near 161 before traders step in aggressively. This would be equivalent to just under 129 in the 10-year note.

**Bond Futures Market Consensus:** The note will probably need to "catch up". Look for a possible move to about 161 in the ZB and just under 129 in the ZN. 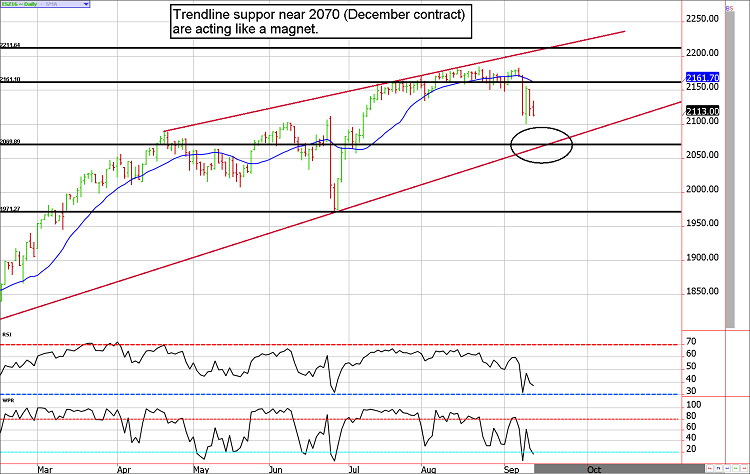 The triple witch will be tricky

*You should be trading the December contract going forward!

In the past, the third quarter expiration has been tricky; although more often than not the September triple witch has been bullish, those occasions in which the bears took control were pretty ugly; this is particularly true in the late 1990s and early 2000's. For example, the Dow dropped over 1,300 points during expiration week in 2001.

If we are right about an expiration sell-off, this could bring the December e-mini S&P to 2070 in the coming days. If we are wrong about this occurring by Friday, it would likely be in the cards for next week which has historically been overwhelmingly weak for the stock market.

**e-mini S&P Futures Market Consensus:**
Our best idea would be to get temporarily bullish with swing trades should the ES fall into the 2070 area.

These are based on the December contract!

August 25 - Buy back the ES 2200 call to lock in moderate gain ahead of Yellen's speech.