Trading volume continues to disappoint, and direction is lacking.

Hopefully, most of you are still enjoying the summer vacation. We haven't seen this type of summer doldrum trade for quite a while. In fact, we've now gone 27 trading sessions without a 1% move in either direction. This hasn't happened since the summer of 2014 and is historically rare. It is hard to believe that earlier this year, the market was moving 1% up or down hourly and now it can't seem to do it in a trading session.

The one thing I do know is this won't last. Investors and traders have grown complacent, and that is precisely the environment that breeds chaos. It isn't a matter of if, it is a matter of when volatility rears its ugly head.

This isn't a notable news week, but the FOMC minutes released tomorrow afternoon could see a reaction. 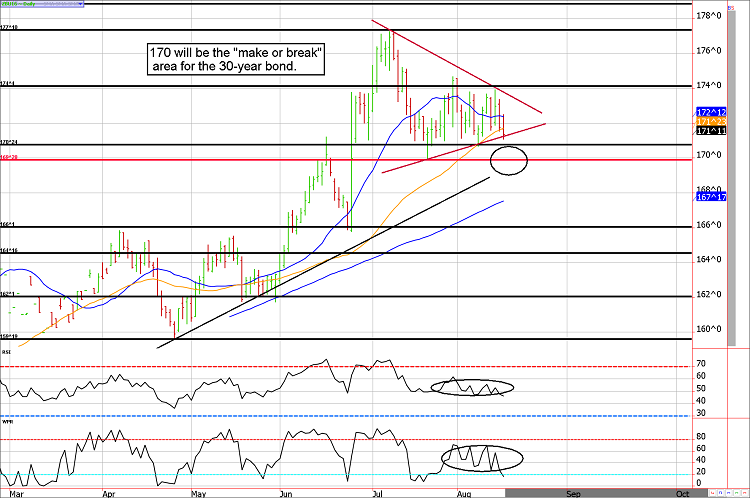 Bonds and notes traded moderately lower on Tuesday following a slight uptick in inflation and a reminder from a Fed member that the rate hike campaign is still in effect. In fact, Dudley claims that the Presidential race will have little impact on the Fed's decision to tighten money supplies and added that the US economy would likely improve later in the year. As a result, those who were getting comfortably long Treasuries early this morning quickly changed their minds.

Unfortunately, we still have nothing to go on in this market. If the ZB gets down to the 170 area, we might be interested in turning slightly bullish based on seasonals and technical analysis but we'll have to see what it looks like once we get there. Obviously, the big picture is that Treasuries are extremely high.

**Bond Futures Market Consensus:** Seasonal tendencies are still bullish, but the charts are neutral. We don't see any edge either way...waiting for a clearer picture. 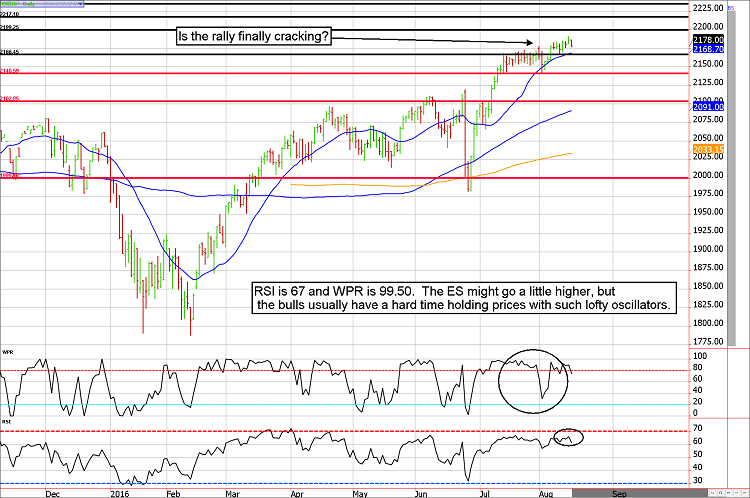 The ES is teetering, can it roll over?

The S&P is too high to buy, but selling it hasn't worked either. Nevertheless, markets can't grind sideways to higher forever. At some point, investors will look to take profits, or a bearish news story will wake up the investors who are snoozing through this sluggish bull.

Today's downturn was relatively promising for the bears in that prices refused to recover despite having several opportunities. On each of today's dips, there were bargain hunters but they simply didn't have the conviction to bring prices out of the hole. This is a different feel than we have been seen in recent weeks and leads us to believe we might finally be in store for a corrective move.

**From yesterday, but still the overall idea:**

The ES is creeping up on an RSI reading of 70, which has historically been a bull market killer (at least temporarily). You might recall we wrote in our newsletter a few weeks ago that because of the lack of volatility, oscillators couldn't be trusted. This isn't quite as true as it was then but it is still worth noting that the low volatility could mean the ES would need to make a move above 2200, maybe even as high as 2217 to truly reach an extended RSI (even though it is only three RSI points away).

Accordingly, even if we are right about this market getting toppy near a 70 RSI, that doesn't mean it is as simple as selling at the current level and placing a tight stop loss order. Bearish traders will likely be forced to endure some pain before the market moved favorably.

We realize that the trend is higher and that it is sometimes the friend of traders, but the truth is the risk of being long at these levels probably doesn't justify the risk that comes with being "long and wrong". If this market ever goes into correction mode, it could be fierce.

**e-mini S&P Futures Market Consensus:** The market is growing dangerously overbought, but that doesn't mean we can't see 2200 or even 2217 before rolling over. We wouldn't want to be long, the ES could be an accident waiting to happen.