Futures market volatility is abundant with payroll data and earnings around the corner.

Investors are on edge ahead of event risk

Thus far the summer of 2016 has been highly volatile, and we don't see any signs of this changing anytime soon. From grains, to energies, to currencies and, of course, the financials, there have been fortunes made and lost in the markets. We suspect this trend will continue well into the fall months. Accordingly, it is generally a good idea to try to keep speculative bets on the small side.

Risk-off assets such as Treasuries and gold are highly overextended despite the fact that equity market are hovering at relatively lofty levels. In our view, this offers a glimpse into the minds of investors; it is clear they are far from comfortable with the current environment. We can't blame them; we've yet to resolve the Brexit vote implications and we will soon be forced to endure the latest US employment report and, more important, it's potential impact on the Fed's interest rate policy. Soon after, the second quarter earnings season will roll out. With all of this in mind, it might be worth unloading some risk where possible. 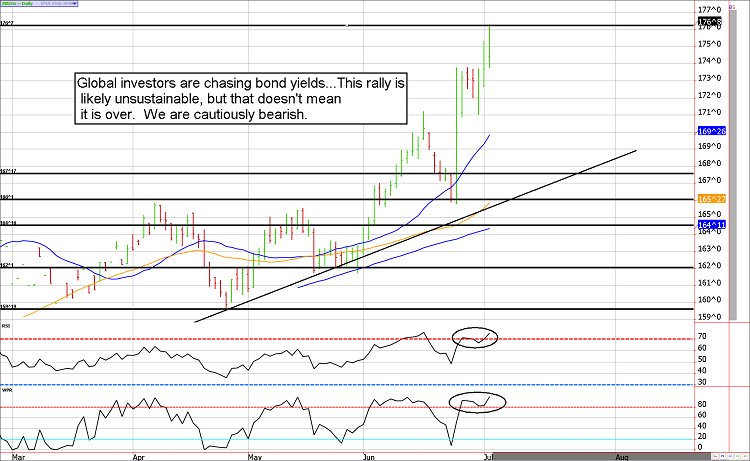 ZIRP is triggering a hunt for yield

The new buzzword in the global financial markets is ZIRP (Zero Interest Rate Policy). Despite the Fed's efforts to normalize rates, monetary policy in Japan and Europe forcing rates into negative territory has lured global investors into what are relatively fat yielding US Treasuries. In turn, it has forced domestic interest rates lower. It is hard to believe, but 1.35% over 10-years sounds good in some parts of the world, so they are moving money into the US to take advantage of the "opportunity".

As we've noted in previous newsletters, Treasuries generally move higher during the summer so seasonal tendencies side with the bulls. However, from a charting perspective. the upside in Treasuries feels limited. We are starting to see technical oscillators creep into the (insanely) overbought territory. This doesn't guarantee a reversal, but it certainly increases the odds of one.

When or where the market reverses, is questionable given the fact that we are at all-time highs. Simply put, there are no notable resistance areas because we've never been here before. Nevertheless, what has been the best investment on the board (US bonds and notes) might soon become the worst. Even a monthly chart is reading an RSI in excess of 70. This has only occurred two other times in the last 16 years, and both were eventually met with massive selling.

**Bond Futures Market Consensus:** We have a feeling the jobs numbers will turn the Treasury market around. The upside "should" be somewhat limited from here. 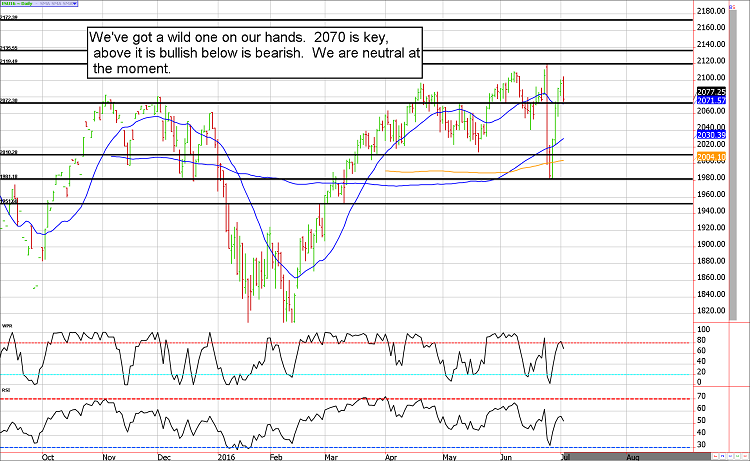 We now know the holiday short squeeze dried up near 2105. Since then prices have migrated back toward 2070 which represents a relatively neutral price point. In fact, this will act as the market pivot; if prices travel below it in the coming days the market turns bearish but if the bulls successfully defend 2070 support, they maintain an edge. Other than that, we don't have much of an opinion until we can see what the market does with this level.

**e-mini S&P Futures Market Consensus:** We are neutral, but hoping for a sharp employment report rally. We would be comfortably bearish from the 2130ish area.

June 21 - Buy back September corn 520 calls to lock in profit of anywhere from $300 to $250 per contract before transaction costs.

June 22 - Buy back short ZN calls to lock in small profit and cut risk ahead of Brexit.