Citizens of Britain opted to take a bold stance, and the financial futures markets paid the price

If you were on the sidelines last night when the news hit, congratulations. It is easy to get sucked into the sorrow of knowing you missed out on some big market moves, but the reality is....most traders attempting to surf the waves of volatility wiped out. Either they were stopped out prematurely on the pre-Brexit realization, or they were too late to react and sold the lows in the ES (or bought the highs in the ZB). Many of my colleagues were watching the futures markets from afar, and happy to be experiencing one of the largest currency and Treasury moves in history with a bowl of popcorn in their lap instead of a bottle of whiskey.

We aren't even going to attempt to predict what Monday will look like. Nor will we make any trading recommendations until the chaos dies down. That said, we will be strongly considering adding to our short Fed Funds futures position early next week. 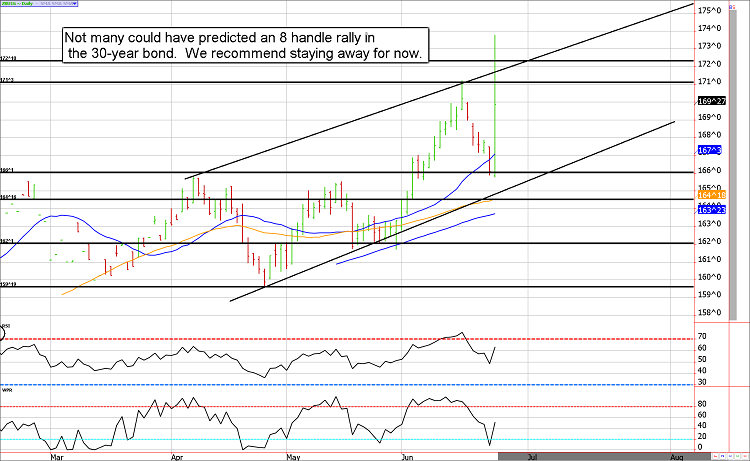 We were hoping for a Brexit fallout to get bullish Treasury futures from better levels, but we got the opposite...stay away for now.

For those up all night watching the fireworks, as we were, the 30-year bond was up about 8 full handles at its peak. If you've done the math, that means a one lot trader could have made or lost $8,000 in a few hours. That's a little steep for most personalities. Of course, the reaction was panic, particularly when the e-mini S&P went locked limit. Traders were buying Treasury futures to hedge against potential further declines in the e-mini S&P future (the CME was scheduled to increase the price limit from 1999 to 1957 on the day session open). As it turns out, there are a lot of bond and note buyers suffering from remorse.

We like the idea of staying on the sidelines until things calm down. 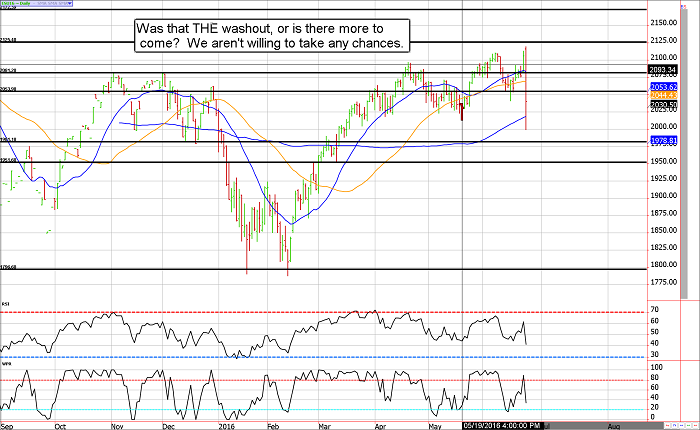 After printing 2119.50 last night, the ES fell to 1999. The 120 handle drop was fast and was probably mitigated by the CME's circuit breaker. Had the limit down price not been in effect, we could have easily seen a temporary collapse into the 1970s.

To be completely honest, we aren't sure what to do from here other than watch and wait.

June 21 - Buy back September corn 520 calls to lock in profit of anywhere from $300 to $250 per contract before transaction costs.

June 22 - Buy back short ZN calls to lock in small profit and cut risk ahead of Brexit.