Unfortunately for anyone holding stocks in their retirement portfolio, or anybody playing the long side of the e-mini S&P in the future market, stocks aren't trading on their own fundamentals. The broad market is simply following crude oil lower, and occasionally temporarily higher.

It is important to remember the last time crude oil traded near $30, the S&P 500 was near 1,100, and the world was concerned we would no longer have a functioning banking system. This time around, we are in a much different situation. Unless I'm missing something, it is far less dire (unless you are long commodities). Nevertheless, something has to come back into line. Either oil, and the other beaten down commodities need to make a move higher, or stocks need to move lower.

In recent days we've been "blessed" with some rather bold analyst calls in the commodity space. Some large and relatively well respected banks and analysts are calling for oil to fall to 20s per barrel, and in one instance expectations are for $10 crude oil!!! Perhaps these prediction will be accurate, but we have serious doubts. It smells a little like the widespread analyst expectations for $200 crude oil in 2008 when $150 crude oil was considered "cheap". 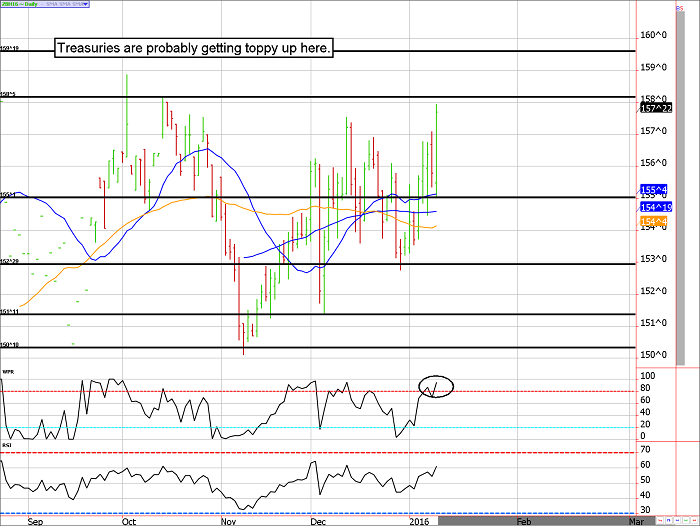 The safety bid finally shows up in the 30-year bond futures market, but is the party over?

Yesterday we were surprised to see Treasury bonds and notes hugging unchanged in an environment in which the S&P 500 was experiencing significant volatility, and downside risk. Today, we finally saw the action in Treasuries that would have been expected in the previous sessions. However, we have to wonder if the bond market is late to the "risk off" party. Both stocks, and (dare we say) crude oil, are attempting to find lows. Even if they prove to be temporary, a few days of bouncing "should" be in the cards. If so, today's Treasury rally could easily be reversed.

We've been looking for resistance near 158 in the ZB and 128ish in the ZN, and we are finally here. The best trades should be from the short side into strength for the time being.

**Bond Futures Market Consensus:** Treasuries feel a little lofty up here. The best trades should be from the short side in the coming weeks. 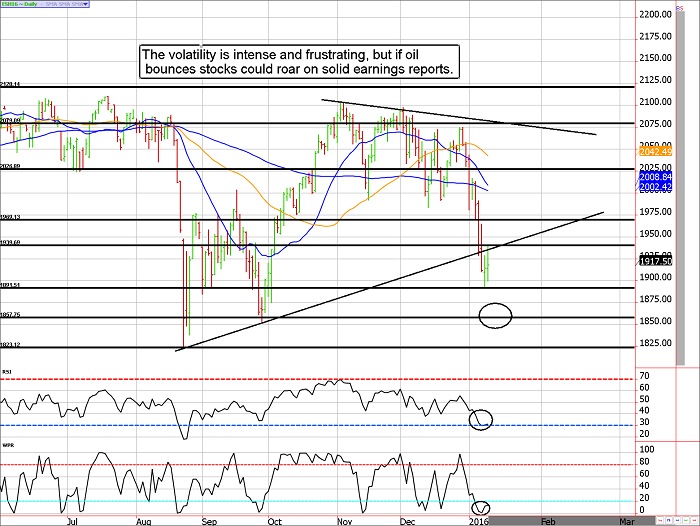 China has stabilized, now can oil?

If oil stabilizes, and earnings are at least tolerable, the S&P should pull out of this ugly dip with bruises, rather than scars. This seems like a big "if" given the current vacuum selling in the energy complex, but we are relatively confident the odds of such a reversal are not only realistic, but maybe even likely.

The March ES traded as high as 1940 this morning, only to find the gains fizzle out as crude oil fell well into negative territory. This isn't shocking given the recent correlation. Algorithm traders (the machines) as well as human traders, have been "programmed" to sell one asset class as the other ticks lower, and vice versa. Yet, there are plenty of potential catalysts for trend changes coming down the pipeline. Hopefully, we are near a climax in volatility.

**e-mini S&P Futures Market Consensus:** It is going to be a bumpy ride, but most of the selling is probably behind us. With that said, the mid-1800s are possible before the tides turn.