The energy futures market is still in control

It will be difficult for the stock market to get much of anything going on the upside, without stability in the energy market. Both crude oil and natural gas have fallen to levels of despair for energy producers. Further, economies in oil rich areas such as Houston, and parts of New Mexico and Colorado, as well as the Bakken, are slumping significantly.

As is often the case with bubbles, sometimes they are only obvious after the fact. I should have known when my brother, a long-time member of the oil industry disclosed to me that oil field workers were paying New York style rents for run-down trailers near Farmington New Mexico (an oil rich area).

With oil valued above $100 it was clear the there was some exuberance that needed to be worked out, but few would have predicted a $30 handle a year and a half later. Nevertheless, here we are...and ironically, investors are praying for higher energy prices to avoid debt defaults that could send stocks reeling. Luckily, the Euro seems to have put in a long-term bottom..if this is the case, oil should eventually follow suit.

See our thoughts on this in the latest DeCarley Perspective: https://madmimi.com/s/ed5507 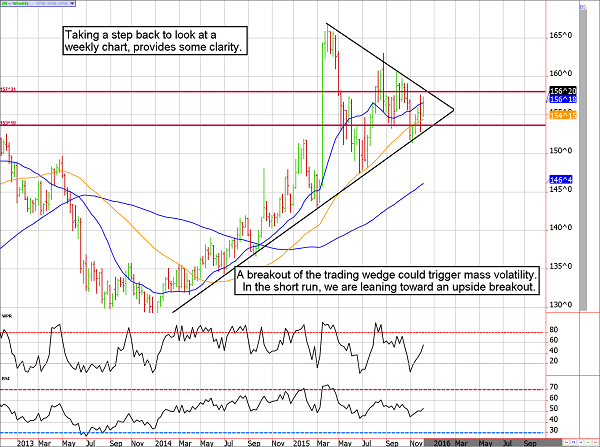 The weekly bond futures chart is a little more telling

As confusing as the daily chart of the ZB is, the weekly chart is rather clear. Treasuries have formed a long-term trading wedge, which could resolve itself in the short-term. Naturally, the initial break-out could be in either direction but momentum and seasonal pressure seems to point toward the upside. Yes, this is possible despite a possible Fed rate hike next week.

It seems the consensus opinion is the Fed will raise rates by an inconsequential amount (25 basis points), then leave rates steady for the foreseeable future. If this is the case, the long bond probably won't have a big reaction to the change in policy.

**Bond Futures Market Consensus:** Tomorrow's trade is "iffy" but we wouldn't be surprised to see the long bond press into the 157/158 area going into the Fed meeting. 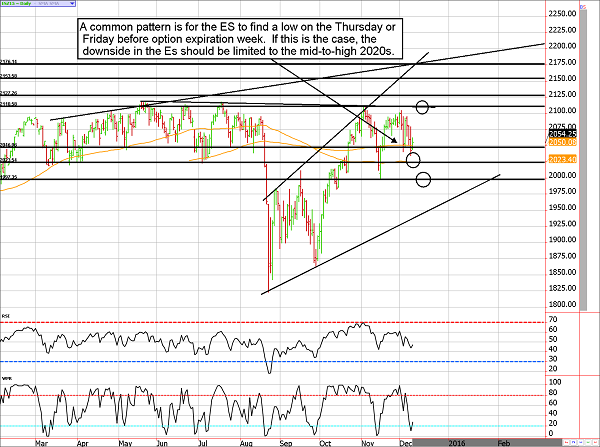 Thursday/Friday low in ES futures before expiration is the norm, was that it? Or is there one more dip?

We are leaning higher overall, but we all know that a strong up day in the ES doesn't equate to a bull market. Instead, we've been seeing a lot of switchback trade that leaves both the bears and bulls unfulfilled. We aren't fully convinced yesterday's low was the low of this move, but if it wasn't we think we are within a day or two from significant bottom.

Should we get one more probe lower, we could see the mid-to-low-2020s, but it feels like the downside should be limited there. After all, the market often rallies into Fed meetings, and the Triple Witch Friday generally sees buying into the Friday morning futures contract expiration.

October 16 - Buy December corn in a small fashion (mini contracts or full size, depending on risk tolerance and funding).

November 30 - Roll the January nat gas 225 put, into a January 210 put and a February 205 put. This gives the market some much needed breathing room.

December 3 - After a wild day, another euro adjustment is necessary. Buy back the existing strangle (near break even), and sell the 106/113 strangle in the January euro.

December 8 - Sell the January euro 112 call for about 33 ticks to bring in more premium and re-strangle the euro.

December 8 - Roll the January nat gas 210 put into a March 195 put to reduce risk exposure in this market, but give the trade a chance to recover.