The data is suggesting inflation remains an non-issue

Yesterday's PPI was reported to be even softener than analysts expectations. The headline figure suggests that prices at the producer level have decreased by .5%, but even the core reading was -.3%, Today's CPI painted a similar picture; the headline was -.2% and the core was .2%. In a nutshell, these reports are telling the markets the Fed isn't forced to take action. They can continue to take their time with the timing of the first rate hike in over 9 years.

A few months ago we had predicted that the Fed would probably wait until the December meeting to begin raising rates because at that time most people will be enjoying the holidays, rather than drooling over everything the Fed does. We still think that this is a rather high probability. However, the Fed Funds futures market has dwindled the odds of a December rate hike to about 25% (in other words, the market disagrees with us).

The "market' doesn't value the odds of a hike above 50% until we get into the spring of 2016. This is a dramatic change in stance of that seen a few months ago in which the Fed Funds futures market was suggesting a 50% chance of a rate hike in the October or December meeting.

Despite the squeeze, Treasuries are under pressure 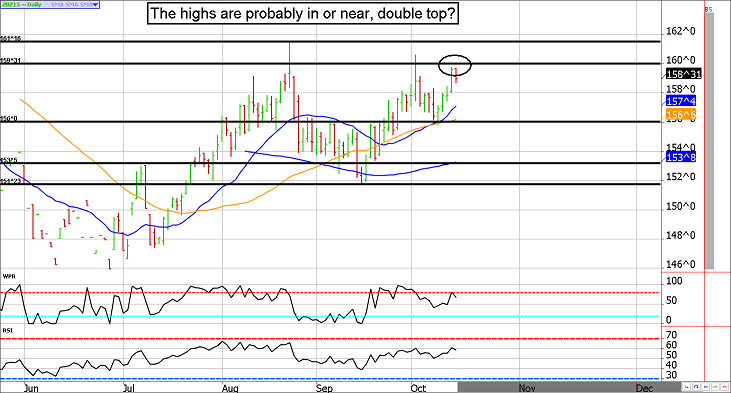 Sometimes it can be difficult to accept the fact that a market can retest highs and still be a bear. However, that is probably exactly what we are seeing in bonds and notes. It is important to be aware of the nature of speculators.

The recent rally in Treasuries was sharp, and on the heels of a nice correction; accordingly, it likely attracted the interest of fresh short sellers at precisely the worst time (for the late sellers anyway). Once the price squeeze begins (as it did last week) the bears with low account funding, too many contracts on, or simply lack conviction in their trade, scramble to buy back their short futures contracts. However, those who were a little better funded might have been able to put their head in the sand long enough to ride out the initial wave of buying, but they often spend the next decline looking for a place to exit with their shirts (as they did early this week).

This is what we believe happened as prices in the ZB mad their way back toward the late September highs from the early October lows. Despite swift buying, this price pattern is more bearish than it is bullish.

The bears should be looking to play the downside on sharp rallies.

**Bond Futures Market Consensus:** The highs are likely in, or at least near, for now. Look for places near resistance to get bearish.

Aside from some overnight back and filling, we believe the e-mini S&P futures are making a run for 2040ish 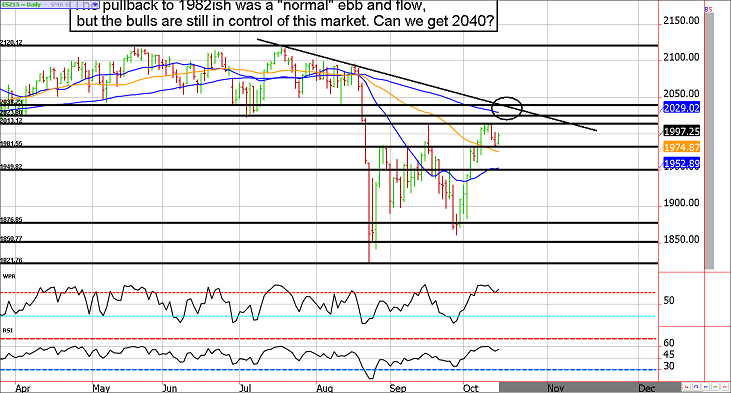 (This was mostly written before the massive late day short squeeze, so although it is only hours late it is somewhat tardy).

We prefer to be the bull in the "China shop", despite the fact that the majority if commentators seem to be bears. Most of the online blogs, and trading newsletters we've seen are overwhelmingly looking for a reversal in the ES futures contract now that we've retested the September highs. Nevertheless, if "everyone is bearish" most of the sellers have probably already acted. Accordingly, there might not be many speculators ready to sell. Additionally, there will be more motivated buying due to short covering.

Today's massive rally was impressive, and probably calls for some overnight back and filling. However, we are looking for this run to carry the S&P 500 futures into the 2040 area.

**e-mini S&P Futures Market Consensus:** The short squeeze should see 2040 before all is said and done, in the meantime look for some overnight back and filling.