***All rights reserved. Reproduction or distribution of this newsletter without prior consent is strictly prohibited.**

It was clear from the get-go that traders opted to turn Presidents' Day weekend into a four day affair.  Trading volume has been an ongoing concern for some time, but the most recent trading week has been almost shocking.  I can't recall seeing such inactive markets in post financial crisis trade.

I can't help but think back to February of 2007; the S&P was in the midst of a similarly relentless grind higher in a low volume and low volatility environment. Eventually, the market simply buckled under the pressure if its own weight.  The once complacent retail investors began to panic causing the S&P to fall about a hundred points in a very short period of time.

In 2007, the market was able to recover and post new all time highs a few short months later, but the correction was fierce and quick.  Our best guess is that we could be in store for something similar. After all, corrections are a normal and necessary part of any healthy bull and this market is well overdue.  Yet, on the other hand...longer term fundamentals suggest (as well as the infamous January effect) that 2013 could be a good year for the markets overall so the correction might be deep, but it likely won't be long-standing. 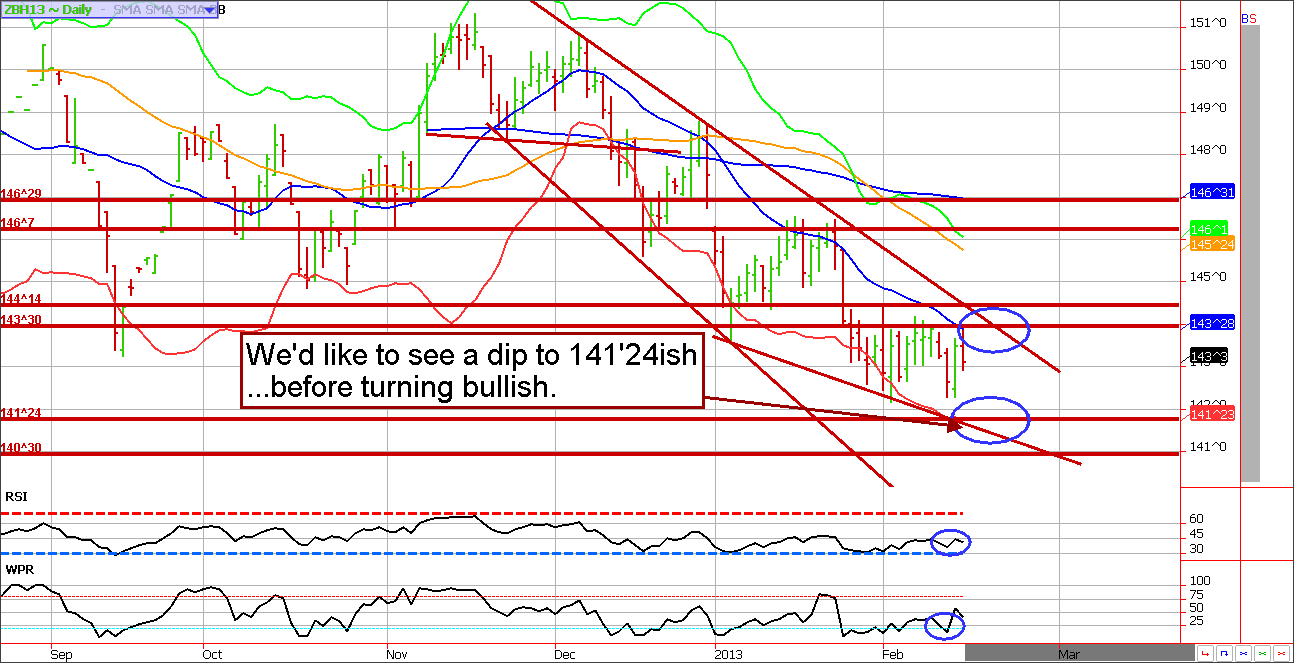 30 year bond auction comes through, but we still might see a flush

As it turns out, yesterday's issuance of 30-year Treasury securities was the best of the bunch.  As a result, the ZB found a way to rally before hitting its downside technical objectives (more importantly the prices we were interested in seeing before turning bullish).  However, Friday's trade and the never-ending equity rally continues to leave the door open for bonds to make one more run at the sell-stops.

Such a flush, which would knock the weak handed bulls, is sometimes a necessary evil to putting a rally together.  After all, it elects all the standing sell orders and leaves traders yearning to buy to get back in.  The motivation of buyers to re-enter, along with bargain hunters looking to bottom fish can often encourage a dramatic reversal.

The Fed's Bullard made comments yesterday that could be interpreted as anti-QE.  While we agree this isn't a valid concern, that doesn't mean the markets won't spend a few days reacting to the idea.  In addition, we have a plethora of news due next week, including inflation, which might keep the trend in tact early in the week. If so, this sentiment could pave the way for a move just under 142.  At this price, we'll likely be comfortably bullish.  Stay tuned!

**Consensus:** We suspect there might be a spill in Treasury prices before a stronger recovery is possible.  Look to get bullish near support levels noted below. 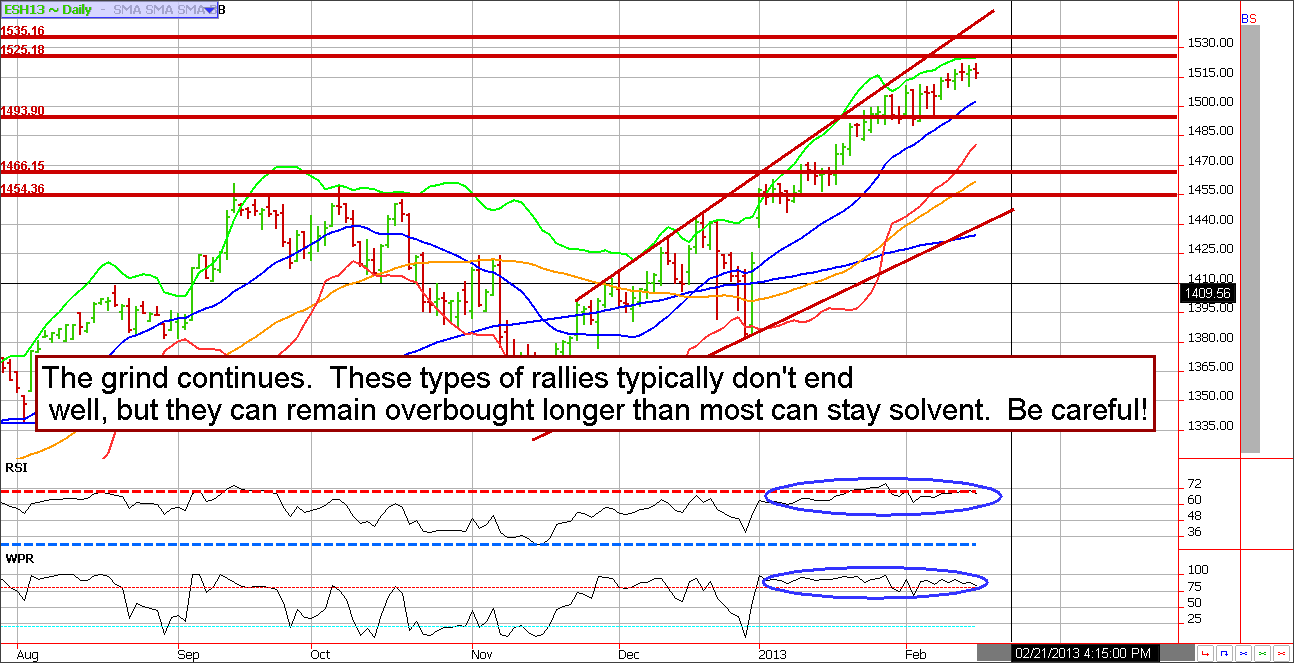 This can't end well, but it doesn't have to end immediately.  Play it close to the chest.

As the S&P continues to defy gravity, we continue to hear horror stories of trading accounts being "blown out".  According to our sources on the CME floor, even some of the most experienced and highly capitalized traders have fallen from grace at the hands of this rally.

Not only has trade been overall one-sided, but many of the common barometers used to (attempt) to predict price have been misleading.  For instance, most equity indices are trading near all times highs, yet Treasuries yields are near all time lows.  Similarly, equity traders are willing to buy into the market as the Euro rallies, but chooses to ignore the currency market if selling comes into the Euro.

The bottom line is that traders must make sure they are positioned to live another day.  Although the longer the market grinds higher, the further and faster it will likely eventually fall it can stay overbought longer than most can stay solvent.  If you are playing the downside, be sure you aren't betting the farm.  There will be better trading environments down the road.

A cheap and low risk play might be to simply buy lottery tickets (we call them lottery tickets because they are low risk/high reward/low probability ventures).  Aggressive traders could look to begin at current levels but conservative traders might look for a spike in the S&P 500 futures into the 1525ish area.  We like the March ES puts with strikes of 1480 or lower.

**Consensus:** 1525ish and then 1534 are the next resistance areas.  We are cautiously bearish, perhaps post holiday and option expiration trade next week will finally weigh on pricing.

Flat - Volatility is incredibly low, we're waiting to see if things pick up next week before making any short option recommendations.

DeCarley Trading
Twitter:@carleygarner
This email address is being protected from spambots. You need JavaScript enabled to view it.
1-866-790-TRADE(8723)
http://www.decarleytrading.com
www.CurrencyTradingtheBook.com